Can’t believe it’s been over six months since I last wrote anything on here. So what’s happened?

Not that much really. Nothing life-changing, certainly. Surprised at how much new music I’ve bought/am buying this year. Bought The Anchoress’s  debut album Confessions of a Romance Novelist, which was co-written and produced by ‘my mate’ Paul Draper, of Mansun fame. Then he himself released some long awaited new stuff, EP One arriving in June. Which was nice.

Have preordered new albums by some of my favourites, two of which via crowdfunding sites: KT Tunstall has KIN out in October, a week after The Divine Comedy’s Foreverland is due out. Then, I suddenly realised a day or two ago that I preordered Madness’s new CD, Can’t Touch Us Now, back in May. It’s not out til October.

Speaking of Madness, I went to see Suggs back in May. 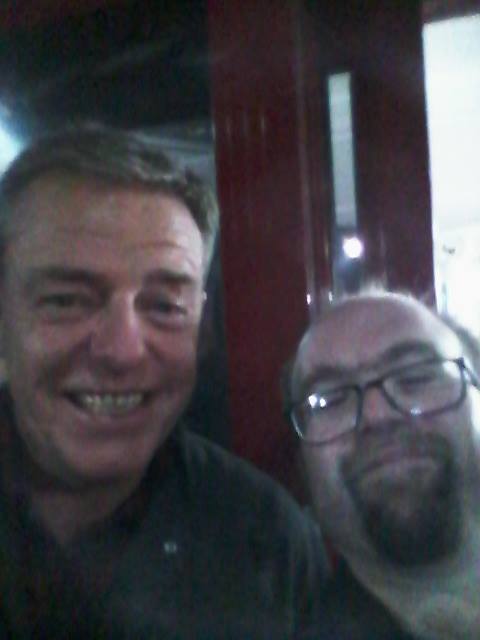 Back in January, I was itching to spend my birthday money on a trip to the theatre. I knew my beloved Rocky Horror Show was due in town in June, but, as the show gets bigger and brighter with every tour, and I had a bit of a problem with some of the lighting effects last time, I didn’t want to push my luck and go again, so I reluctantly passed. Still, I got a Suggs ticket instead. Funny enough, Madness are playing in Sheffield later this year, as are The Divine Comedy. I’ll not be going to either gig, though. Can’t afford it. I’ve got other stuff happening, anyway.

Last March, I was in full-on Reeves & Mortimer mode, after buying my ticket to see Vic and Bob on tour in December.

However, come October, Bob was selfish enough to need triple heart bypass surgery, meaning that the first leg of the tour – including the Sheffield date – was cancelled. I was gutted. Before the gig was cancelled, I’d already been moaning about the nine month wait between getting the ticket and the actual show. For it to not go ahead was devastating. Not least because the second was going to go ahead in the new year, and start in fucking Leeds.

The tickets were refunded, and I was extremely unhappy. Had to stop reading Bob’s Tweets because they were all about how good the shows were. I bought a tour programme online, and remained thoroughly miserable, knowing I wouldn’t be seeing them.

But then, come April, new dates were announced. All the gigs that were cancelled were being rescheduled. Of course, because the other tickets had been refunded, we had to buy them all again. My sister had bought all four tickets last time, for her three brothers to pay her back (which we duly did). However, this time, no-one had enough/any money to buy one ticket, never mind four all together. I definitely wasn’t to miss out, so maxxed out my credit card, and bought two tickets, for me and my brother. My sister’s saving to go to Disneyland Paris in October, and my other brother manages to get himself to plenty of gigs through the year, so I figured my penniless brother could go. The show’s in December, it can be his Christmas present.

So…I think that’s it really. Currently looking forward to the new series of Red Dwarf, of course. That’s on in September. That’s a busy month, isn’t it?

So, I guess it’s time for me to wander off again. I might be back at some point in the near future. Ciao for now.

Posted by Si on November 10, 2012
Posted in: Uncategorized. Tagged: Madness. Leave a comment

The last couple of weeks, I’ve been on a massive Madness kick.
It started on Halloween, actually. I was wandering round town, with my MP3 player on, and just really wanted to listen to Madness. I even Tweeted about it:

*Really* wanted to listen to some Madness today, but I’ve no CDs or MP3s from Suggsy’s lot. Had to go through my vinyl and dig some out.
Had a listen to Absolutely while I was at the flat, and I found the Divine Madness compilation on a cassette, which I’m happily listening to now in the kitchen at my Mum and Dad’s.

Now, this is the thing. Growing up in the ’80s, Madness were fun. I had singles that I remember taking to the youth club – I used to play Wings Of A Dove constantly, I know that for a fact. But having spent the last couple of weeks reading Madness discographies, I realise that the 45’s I took up to the church hall would’ve been at least five years old even then. Madness’s first LP was released just a few months after I was born, and I was but three years old as Our House was rocketing up the charts.
So, my vast vinyl collection, upon inspection, bore only the band’s second album, Absolutely, a compilation LP from 1982, and three singles from 1982/3. The band split up when I was seven, which would have even been a year or so before I took the records up to the youth club!
So, why the sudden kick? I think it was a subliminal thing. We have Radio 2 on constantly in Our House, and I’d obviously heard the ads for their ‘Madness at the BBC’ show, broadcast on November 1st.
Anyway, I went and bought the new album, Oui Oui, Si Si, Ja Ja, Da Da, released at the end of October (I adore the lead track, My Girl 2), went online to buy some CDs, group-ordering the It’s…Madness and It’s…Madness Too compilations plus The Business complete singles boxset, all for a grand total of £5.88. Then I sent for a re-issue of One Step Beyond, and picked up 2009’s The Liberty of Norton Folgate in CEX yesterday for three quid. So that’s a total of nine CDs in less than two weeks, all for less than £24.
And, my God, Madness are a hell of a lot better than I remember! I just wish I hadn’t waited so long to rediscover them.

I will admit, though, that, Suggs, Chas and Mike apart, I still couldn’t tell you who’s who. :/